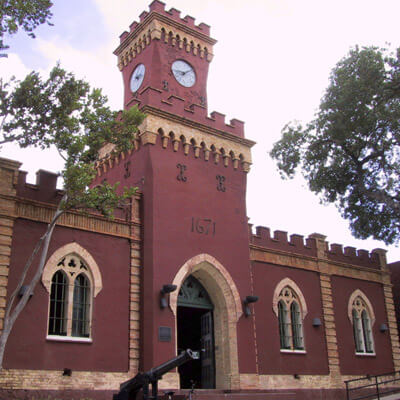 Fort Christian is located in central Charlotte Amalie, now separated from its harbor by Veterans Drive. The historical significance of its placement is obscured by the fact that it is now surrounded on its eastern and western flanks by made land; it originally occupied a narrow peninsula that jutted south into the harbor. The fort was a basically square structure with stone curtain walls and diamond-shaped stone bastions at the corners. The north, east, and west sides at one time were further augmented by ravelins, and there was originally a circular stone tower in the center of the fort. Of these structures, only three of the curtain walls and the four bastions remain, along with some living quarters built along the surviving curtain walls. The central tower was torn down in the 19th century, replaced by the present Gothic Revival structure. 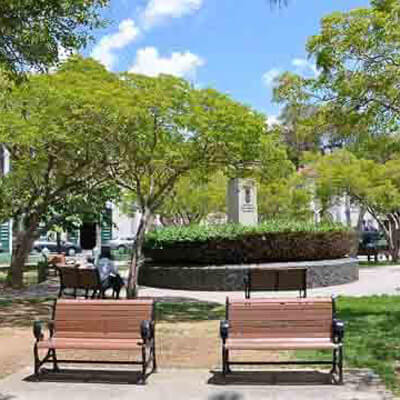 Emancipation Park was named in commemoration of the July 3rd, 1848 emancipation of slaves in the Danish West Indies. On the west side of the park is a conch blower statue which also commemorates emancipation; and a reproduction of the Liberty Bell (every U.S. state and territory has a copy of the Bell). A bust of Denmark’s King Christian IX is situated in the middle of the park. Adjacent to the north side is Grand Galleria; opened in 1840 as the Commercial Hotel and Coffee House. In its heyday the Hotel was the accommodation of distinguished and well-to-do visitors. It remained a hotel until 1975. Renamed Grand Galleria in 2000, it currently houses shops and restaurants.

The Grand Hotel opened in downtown Charlotte Amalie in 1841. It was once one of the premier hotels on the island, and played host to many lavish parties due to its prime location and stylish interior. It remained a popular place for vacationers to stay until it closed in 1975. The Lockhart family - one of the longest-living families in St. Thomas - owns the Grand Galleria. 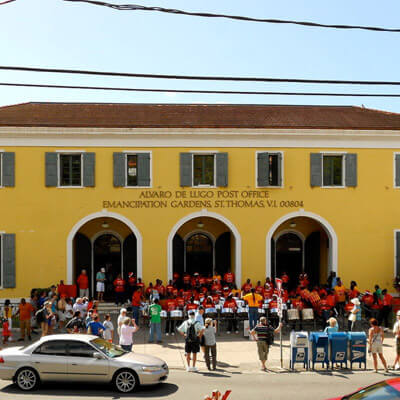 The historic post office in Charlotte Amalie on St. Thomas in the U.S. Virgin Islands was constructed in 1938 with Treasury Department funds. The building is still in service. 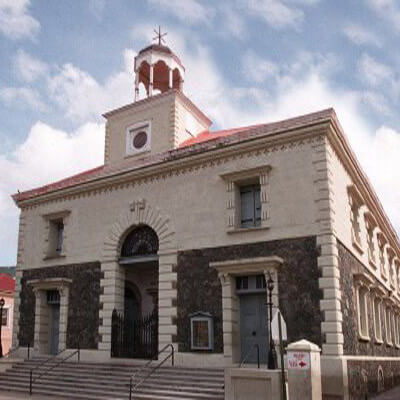 Built in 1884, this church was named to commemorate the 150th anniversary of the Moravian Church in the Virgin Islands. 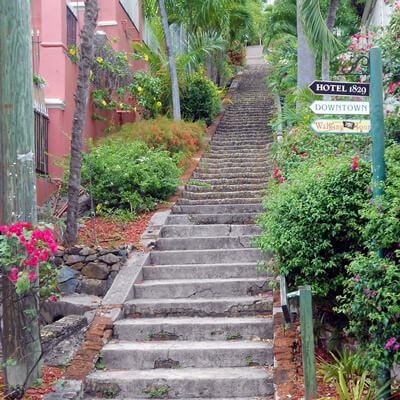 Charlotte Amalie is unique for step streets, or frigangs as the Danes called them. These steps were built in the mid 1700s. Dozens of step streets cut through nearly all the hills rising from the Charlotte Amalie harbor area; the 99 steps are the most popular. They are likely the most photographed as well; the picturesque stairway has colorful flowers on either side making it an easy choice for a photo. The bricks used in the steps were brought from Denmark as ballast in the hulls of sailing ships. The 99 steps original name was Store Taarne Gade which means Greater Tower Street. The 99 steps are actually 103 steps. 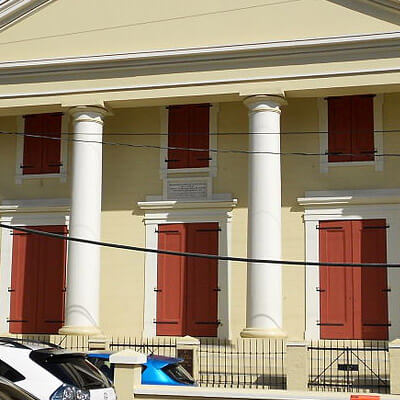 The St. Thomas Reformed Church was established around 1660, and is one of the oldest congregations in the Virgin Islands. Organized by Dutch traders as the St. Thomas Protestant Reformed Dutch Church, early services were held in Fort Christian, which remains a museum and historical site in downtown Charlotte Amalie.

The first church was built in the mid-1670's on the savannah east of the Fort in the area known as Barrcks Yard and remained in use to at least 1731. In the 1740's a new church was built on Snegle Gade, which burned in 1804. A new church was immediately erected, but was again destroyed by fire in 1806.

The congregation was transferred from the Reformed Church in the Netherlands to the Reformed Church in America in 1827. The cornerstone of the present church was laid September 18, 1844 and completed and consecrated on February 8, 1848. Identified by the Danes as the American church, the baccalaureate service to commemorate the transfer of the Danish West Indies to the United States was held here on February 18, 1917.

In 1995 the sanctuary was severely damaged by Hurricane Marilyn. With the assistance of 400 North American volunteers, the sanctuary has been restored to its original elegance. 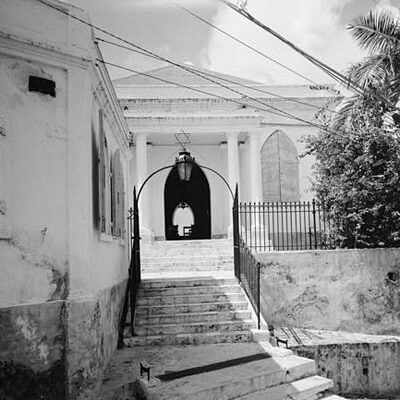 St. Thomas Synagogue is a historic synagogue at 2116 Crystal Gade, Queens Quarters, in Charlotte Amalie on the island of Saint Thomas in the U.S. Virgin Islands. The formal name of the synagogue is Beracha Veshalom Vegmiluth Hasadim. Built in 1833 for a congregation founded in 1792, it is the synagogue with the longest history of continuous use on what is now United States soil. It was declared a National Historic Landmark in 1997. 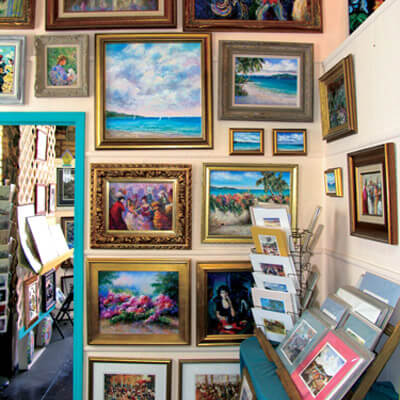 He lived on the island until he was 12, and eventually returned years later. Located on Main Street in downtown Charlotte Amalie, this building that bears his name was both his childhood home and the place of his parents' business. Due to COVID, the gallery and gift shop are currently closed. Normally, it acts as an art gallery that showcases some of Pissarro's original works, as well as paintings by a number of local Virgin Islands artists. The gallery has also been used for special events, including recent showcases by new local distillery ARC Vodka. It is the perfect place to take in the beautiful history and art of St. Thomas. 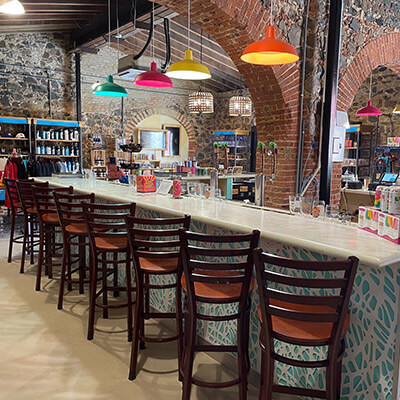 St. John Brewers on the Waterfront is the St. Thomas extension of the popular Tap Room bar and restaurant on St. John. St. John Brewers co-founders Chirag Vyas and Kevin Chipman have been locally brewing delicious craft beer on St. John since 2004, beginning their venture with the first Mango Ale in the Western Hemisphere! Come in to enjoy a selection of our famous brews, our full line of Love City Seltzers, sodas, mixed drinks, and of course, merchandise and gifts! Located in downtown Charlotte Amalie at 32 Raadets Gade next to the St. Thomas Historical Trust and down from Stone House Cafe.